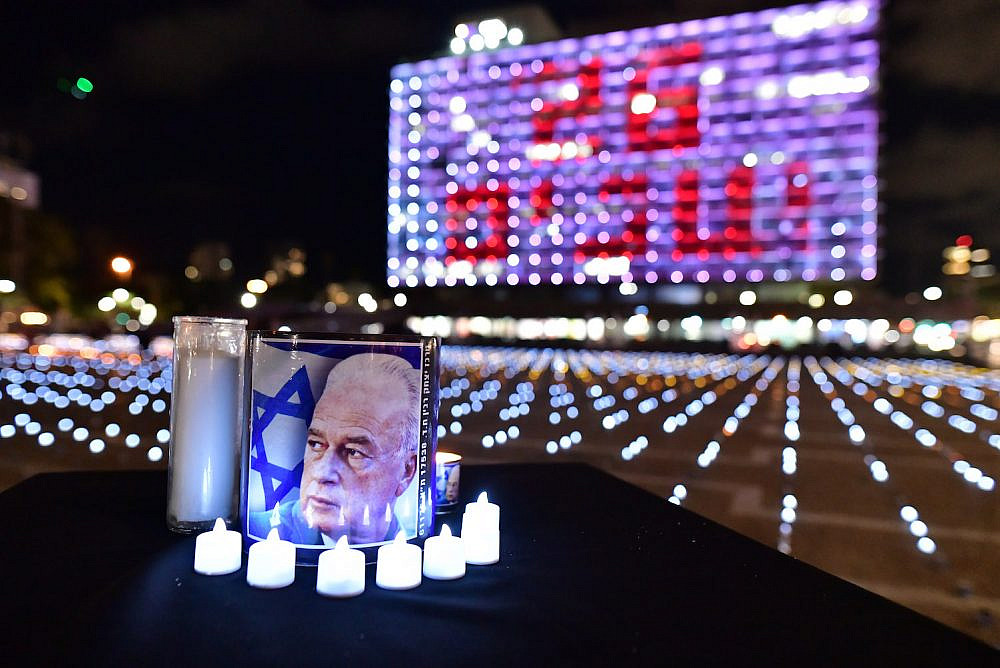 This month, large parts of Tel Aviv’s Rabin Square will be closed to the public to allow the municipality to move forward with construction of the new Tel Aviv-Jaffa light rail. The square, which has witnessed some of the most famous demonstrations in Israel’s history, will host no more major protests or events of any kind for the foreseeable future.

For some Israelis, this is a moment for nostalgic lament. But it ought to be a time for serious introspection. As Israel marks 26 years since the Nov. 4 assassination of Yitzhak Rabin — the general-turned-prime minister renowned for signing the Oslo Accords, and from whom the square takes its name — it also marks 26 years of near-constant decline for the political movement he once led: the so-called Zionist “left.” Now, Rabin Square’s temporary closure presents an opportunity for this camp to permanently relinquish what the site symbolizes and to build a new, genuine left in its place.

Although Rabin Square (which was previously known as Kings of Israel Square) has played host to all manner of protests and struggles throughout Israel’s history, no other political camp has found a home there in the same way as the Zionist left. Its location in central Tel Aviv puts it in the very heart of the country’s Ashkenazi Jewish public, the hegemonic ethnic group which still forms much of the support base of Zionist left parties today.

During the state’s formative years — which were overseen and dominated by the Labor Zionist movement from 1948 to 1977 — the symbolic heartlands of Ashkenazi power derived from the kibbutzim, which spearheaded Zionist settlement in Palestine from the late 19th century. But since the 1980s, the neoliberalization of the Israeli economy has consolidated a bourgeois Ashkenazi upper class, whose economic interests are now represented faithfully by “left-wing” parties like Labor and Meretz, and more recently, by “centrist” parties like Yesh Atid and Blue and White. Tel Aviv, as Israel’s financial and cultural capital, became the symbolic center of that identity.

Over the past decade, what little ideology these parties once had was largely reduced to the politics of “anyone but Bibi,” as epitomized by last year’s Balfour Street protest movement against former Prime Minister Benjamin Netanyahu. Although the anti-Netanyahu protests predominantly took place outside the Prime Minister’s Residence in Jerusalem, Rabin Square was in many ways the movement’s symbolic home. 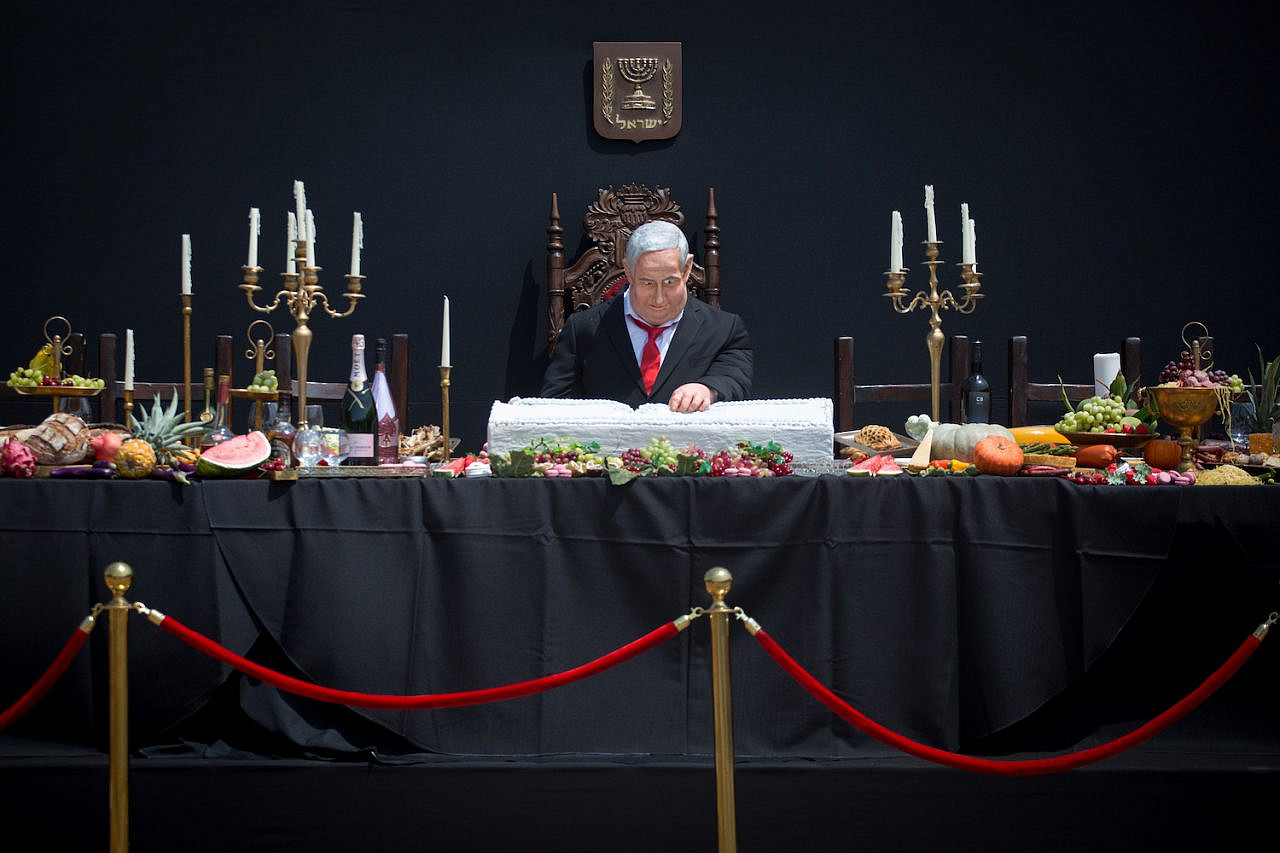 The Israeli artist Itay Zalait, for example, used the square as the venue for two public installations in support of the protests: a life-sized exhibit, called “The Last Supper,” depicted a solitary Netanyahu in Leonardo da Vinci’s famous painting of the same name; another statue depicted a Balfour protester holding an Israeli flag while being struck by a police water cannon, entitled the “Hero of Israel”— an apt description for a political camp based more on nostalgic self-importance than on any vision for the future.

While many in this camp saw the dethroning of Netanyahu and the entry of supposedly left and center parties into a coalition as vindication for their efforts, it is hard to see the new so-called “government of change,” led by Naftali Bennett and Yair Lapid, as an improvement on what came before it. Besides, this rose-tinted nostalgia for an Israel in which the “left” is still a dominant force makes two significant erasures which will forever condemn the camp to political obscurity: Palestinians and Mizrahim.

The Zionist left was not only responsible for the mass displacement and dispossession of Palestinians that began in 1947-48, but it also proceeded to rule the Palestinians who remained in the new State of Israel by military decree until 1966, before embarking on an illegal settlement-building enterprise in the West Bank and Gaza Strip, including East Jerusalem. This history is conveniently forgotten by many in the political camp, encouraging them to blame the Israeli right for the absence of “peace” with the Palestinians while insisting on their own moral righteousness.

Mizrahim, too, suffered enormously under Zionist left rule during the state’s early decades, albeit in different ways. The Zionist movement, even under “leftist” leadership, was a project designed by and for European Jews, and it viewed Mizrahim, who hailed from Arab and other Muslim countries, through the same colonialist lens as it viewed Palestinians. 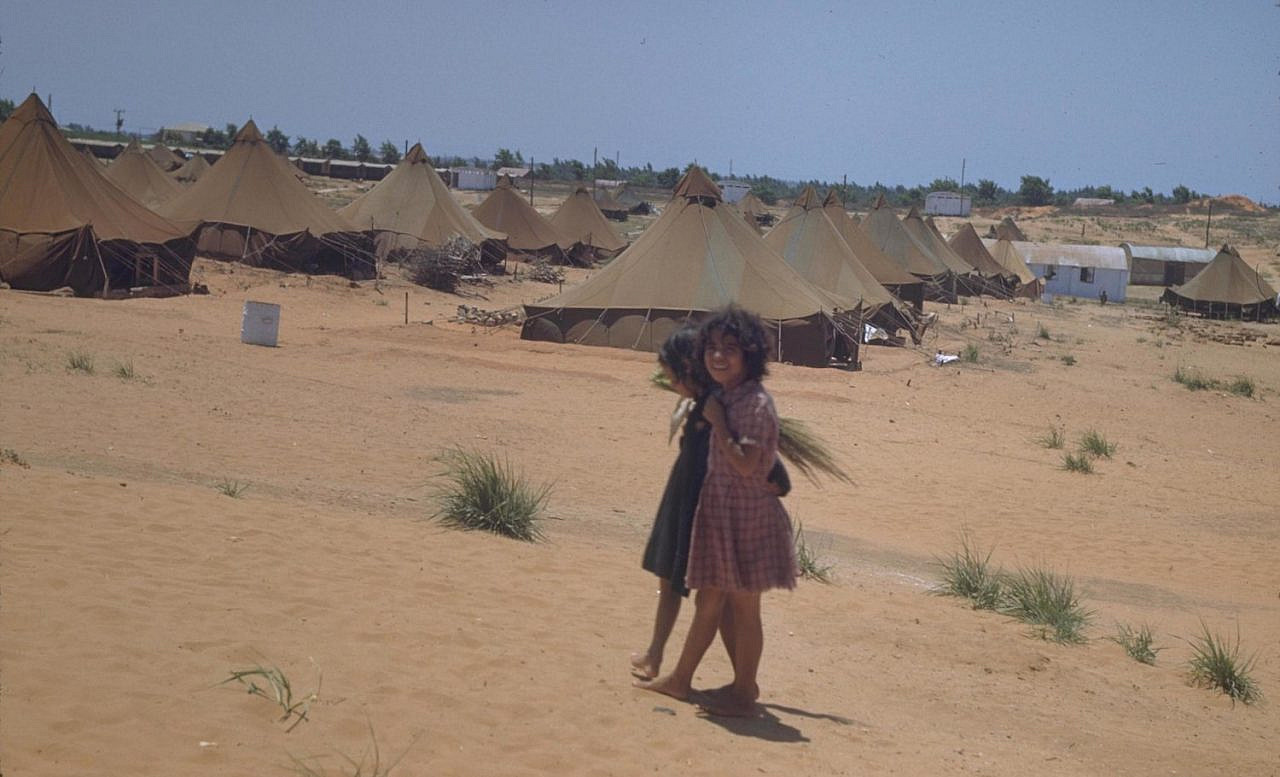 The mass immigration of Mizrahim in the 1950s was thus administered by a racist establishment (including by Israel’s first prime minister, David Ben-Gurion, who described the immigrants as “savage hordes”), with the government ordering them to be sprayed with pesticides upon arrival and settling them in slums or in properties belonging to Palestinian refugees; some even had their babies kidnapped and given to Ashkenazi families.

When Mizrahim rose up against their discrimination in the Haifa neighborhood of Wadi Salib in 1959, and later under the banner of the Israeli Black Panthers in the early 1970s, Labor-led governments brutally repressed their protests. All of this, of course, remains willfully distant from the collective memory of the Zionist left, which looks back so fondly on its pre-1977 heyday.

The right-wing Likud party’s election victory in 1977 spelled the end of Labor’s Bolshevik-style one-party rule, in an “upheaval” fueled in some part by Mizrahi rage against the Labor establishment. Since then, the Zionist left has been distinguished from the other streams of politics in Israel by its relatively “dovish” foreign policy stances.

This was on full display in September 1982, in what was then still Kings of Israel Square. In what may have been the largest demonstration in the square’s history, hundreds of thousands protested under the banner of Peace Now in the aftermath of the massacre at the Sabra and Shatila refugee camps during Israel’s invasion of Lebanon, calling for an official government inquiry into Israel’s responsibility and for the resignation of then-Defense Minister Ariel Sharon. The movement succeeded on both counts.

Yet just one year earlier, in the very same square, the Zionist left showed exactly why moments of mass mobilization like the 1982 protest have been so few and far between. At a Labor Party rally held there ahead of the 1981 election, prominent TV personality and Labor supporter Dudu Topaz stood on stage and addressed the mostly Ashkenazi crowd as “the real people of this country,” telling them that it was “a joy to see that there are no chahchahim who wreck campaign meetings here,” using a derogatory term for Mizrahi and especially North African Jewish men.

The connection between these two events is closer than one might think. The “land-for-peace” formula championed by the Zionist left — implicit in the 1982 demonstration but epitomized most strongly by Rabin’s Oslo process — is not so much a compromise as a potential boon for the camp, allowing its adherents to legitimize the spoils of 1948 (which enriched the Ashkenazi class but were denied to Mizrahim) by relinquishing the spoils of 1967 (through which Mizrahim gained a foothold in Israeli society). All this unfolded while the state enjoyed the benefits of an economic boom linked to its ostensibly “peace-seeking” policy, and which would further integrate Israel’s economy into the global market at the expense of the poorest classes — Mizrahim central among them. 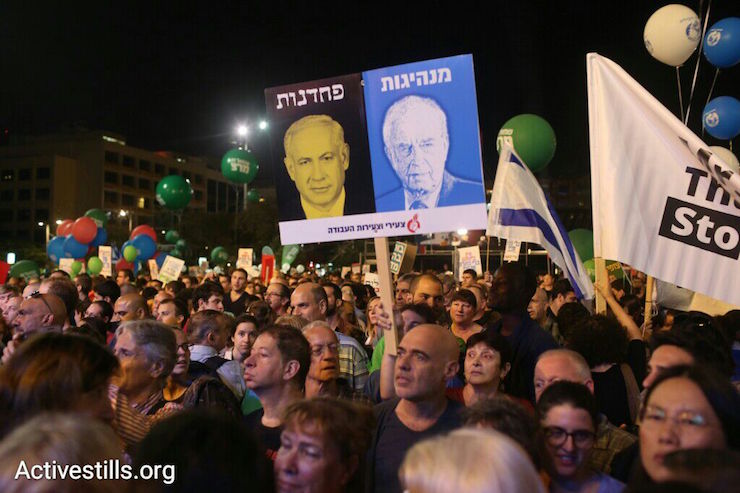 A sign at the Rabin memorial rally featuring an image of Yitzhak Rabin (right) with the word ‘leadership.’ Above an image of Benjamin Netanyahu is the word ‘cowardice,’ Rabin Square, Tel Aviv, October 31, 2015. (Oren Ziv/Activestills.org)

Forty years later, the picture is not so different. The Zionist left may still show up to Rabin Square for a rally every now and then against the most heinous excesses of the right-wing government of the day (though in far smaller numbers than it once did), but it offers no real alternative to the prevailing political reality other than a return to the status quo ante — a structure of state-sanctioned dispossession and institutionalized racism.

The camp’s very DNA renders it unable to question the regime of supremacy that has existed since the state’s establishment, which in turn leaves it unable to appeal to anyone except an increasingly narrow Ashkenazi elite who constitute that regime’s prime beneficiaries. What’s more, it fails to acknowledge how the Oslo separation paradigm, to which this camp remains wedded, has made the lives of Palestinians in the occupied West Bank and Gaza considerably worse, not better.

Even today, the new government’s talk of “shrinking the conflict” has not stopped Israel from expanding settlements or killing Palestinians, nor has it cracked down on spiralling settler violence. Instead, this government has gone further to criminalize Palestinian human rights organizations than any previous administration and seems intent on upending the decades-old religious status quo on Temple Mount/al-Haram a-Sharif.

For the past 26 years, the Zionist left has tried again and again to resurrect Rabin’s spirit by bringing in one military man after another to lead the camp back to its former “glory,” never stopping to think that perhaps the problem is not the leader, but the program. Whether it is former Prime Minister Ehud Barak, of Labor, describing Israel as a “villa in the jungle,” or Meretz MK Yair Golan opposing a Palestinian family unification law because it could “drown Israeli citizens in a sea of Palestinians,” the two parties will continue isolating entire sectors of Israel’s citizenry without presenting any serious challenge to a right wing that grows more extreme and emboldened with each passing year.

But with the closure of Rabin Square comes an opportunity: to leave behind everything it symbolizes, and to build a new political movement in its place. One that will confront the structures of oppression and subjugation that have reigned here since 1948, not just since 1967 or 1977. One that will replace a politics of separation and supremacy with a politics of solidarity and equality for all. And one that is committed to decolonization in the fullest sense, not just where it is convenient.