facebook twitter email link
EU foreign ministers issue a statement regarded by most in the media as weak and good for Israel. I beg to differ 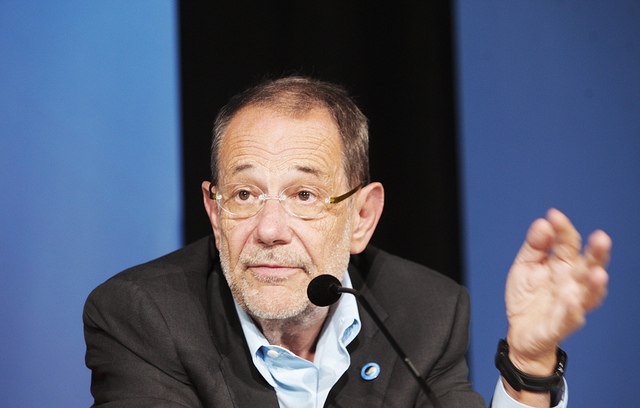 Javier Solana. Didn't get his sanctions (photo by Flickr/Utrikesdepartementets bildarkiv)
The EU yesterday stopped short of recognising a Palestinian state, saying it would do so at “the appropriate time”. At a meeting in Brussels, the ministers reiterated that negotiations are still the way to go.

Israeli officials in Jerusalem must have been extremely happy with this, despite the little slap on the wrist the statement gave concerning the “illegal settlements”. More importantly, the statement didn’t call for sanctions on Israel, even though former EU officials, such as former EU foreign policy chief Javier Solana, recommended punishing Israel for continued construction in the West Bank.

Wild Card supporters (who call for U.S. endorsement of Palestinian unilateralism) might be disconcerted as well. But a closer look at the statement shows that in fact, the vague wording could be spun in an entirely different direction very easily.

As the AFP reports:

The EU statement expresses “regret” at Israel’s rejection of a new freeze, describing settlements as “illegal” and “an obstacle to peace.”

It underlines EU support for “a negotiated solution” between the two sides “within the 12 months set by the Quartet” of international mediators.

It also welcomes a recent World Bank assessment that the Palestinian Authority “is well positioned for the establishment of a State at any point in the near future” and goes on to say that the EU “reiterates its readiness, when appropriate, to recognise a Palestinian state.”

Notice how the statement underlines the fact that the time limit is the 12 months set by the Quartet, which end in August 2011 – when Palestinian PM Salam Fayyad is touted to declare independence. The media and AFP itself say this is not an ultimatum. True, it isn’t. But it’s definitely a signal as to when their currently cold attitude towards Palestinian unilateralism might change.

It’s a bit too soon for Europe to join the over 100 countries who have already recognized Palestine. But if the wave of recognition gains momentum, particularly after Brazil and Argentina joining the group last week, the EU will have an easier time to change its mind.

And if the EU joins, President Barack Obama will find it very difficult to avoid playing the Wild Card.

Roi Maor has sent me this comparison between the EU statement released last night and the statement released almost exactly one year ago. This table shows very well how the EU is losing patience and is gearing towards recognizing a Palestinian state.

The full texts of the statements: